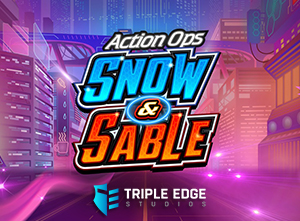 The newest Triple Edge Studios slot for December is a sci-fi title that will get players talking. It's Action Ops: Snow & Sable, and it's produced for the Microgaming Quickfire platform as a part of their exclusive content distribution agreement. This game is a solid way for this developer to cap off 2018.

What This Game Offers

There are two characters that show up as wild symbols in this game, and they offer payouts individually and with mixed wild combinations. Along these lines, you'll also have stacked wild symbols available to help you to get several wins on the same turn. A free spins mode drives the majority of the feature-based action with the ability to win between 10 and 20 free spins at once. During this free spins mode, the first and fifth reels are always filled with wilds, and that makes it much easier to get winning combinations.

The visual aspects of this game are pretty important to the overall experience as well. Everything is set up to look smooth and crisp, and you'll see all kinds of futuristic symbols on the reels with a sci-fi city in the background. The two main characters, Snow and Sable from the title, are the two wild symbols, and they have opposing visual motifs. Snow is dressed in white with a light-blue trim, and Sable is almost identical except the colors are changed to be black with red trim. This contrast in the visual presentation looks great and adds to the feel of the game.

Triple Edge Studios has shown that they are serious about taking advantage of their content distribution deal with Microgaming. The Quickfire platform is their way to access tons of players from across the globe, and putting out solid titles like this one will help them to build their popularity over time. With a late 2018 release like this one to cap off December, they're definitely coming into the new year with quite a bit of momentum. With the quality of games they've put out so far, there's no doubt that they will move into 2019 as their best year yet.