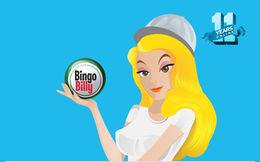 October is known for being the month where the holiday season really kicks into gear, but Bingo Billy has you covered for even more. During this month, they are going to give you a chance to get into a lot of online bingo action while getting yourself a chance for a trip to Las Vegas. That's a different kind of holiday, but it'll be one that you're just as excited about as the ones that are coming up just like they do every year.

How to Earn Points

The Viva Las Vegas Tournament event is giving you a chance to earn points in a few different ways. You get points when you make a deposit, when you hit exclusive patterns in the bingo games, and when you play real money slots and bingo. Bingo Billy isn't playing around when it comes to giving you a lot of different ways to score points in this promotion, and a lot of them are by doing things that you would be doing anyway. This is a great way for an online bingo room to offer players a lot of extra value.

This promotion is over on October 31, but on October 30, they're going to throw a wild card into the mix with a special Viva Las Vegas bingo room that will open up from 6 pm until 11 pm Eastern. There will be special contests and games in this room during this five-hour window that will mix things up, and it's a part of this event that you really won't want to miss.

Getting Started at Bingo Billy

If you're wanting to get started with enjoying everything that this online bingo room has to offer, the first place you should start is with their $30 free chip. This is available for all new players who haven't signed up before. After that, you can get 2,016 percent in bonuses on your first deposit. This is a tremendous bankroll multiplier that players don't want to miss out on because of the sheer overwhelming amount of value that it offers.

Online bingo has gotten more and more attention over the past several years, and Bingo Billy has been giving players bigger and bigger promotions accordingly. You can win a trip to Las Vegas with this promotional event, and there's not telling what else they'll come out with before the year is over.