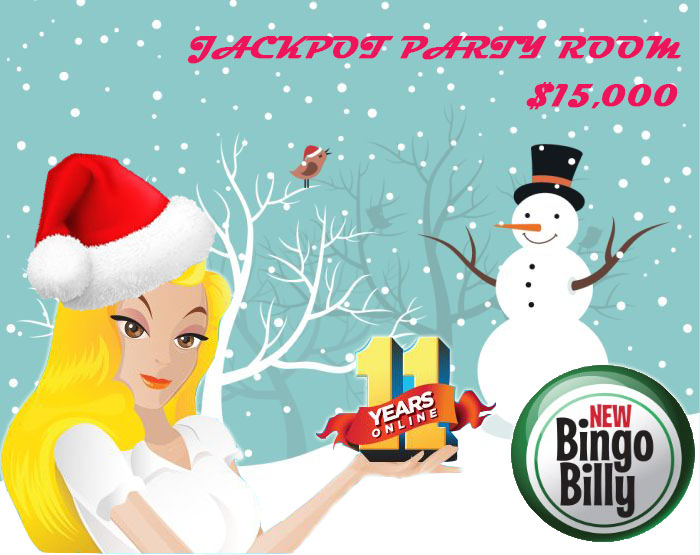 Bingo Billy is looking to help players start off the year on the right foot, and they're doing this with a big game this weekend. A $15,000 jackpot game is up for grabs in the Jackpot Party Room on Sunday, and it'll run from 8 pm through 12 at midnight. There's a jackpot every hour during this time period, and you'll see Everybody Wins games during this four-hour period as well. Overall, it's a pretty serious promotion and a chance to get in on the action with some online bingo.

Of particular importance during this event is the final game of the four-hour run, which begins at 11 pm. The minimum prize is going to be boosted up to $515, and a number of other to-go payouts (up to three) are going to be added as well. This means there is a tremendous amount of value in this particular game, so even if you aren't able to make it to the entire event, this is definitely the one part of the overall party that you won't want to miss.

The holiday season is finally past us, and that's an important part of the overall online bingo landscape. There are a ton of holiday promotions and specials since there are more people home for the holidays and taking time off of work. That means more players for the bingo rooms to compete for, which in turn means more promotions and bigger deals. It's cool to see that there are offers like this one happening after all of the holidays are over with.

Bingo Billy has been taking care of their players since they first opened their doors in 2005. They have great promotions and have won a ton of awards. They focus primarily on being secure and reliable, and that's one of the reasons why they have build up such a tremendous player base since they started running games back over a decade ago. If you're looking for a place to get in on the action for online bingo, this is a great room to choose.