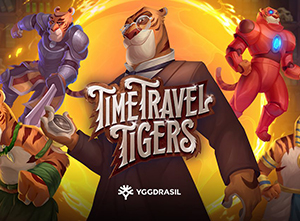 The latest release by Yggdrasil Gaming is sure to turn heads. It's the Time Travel Tigers video slot, and it brings a ton of action with a band of super heroes that have come together from a variety of different time periods.

The Story Behind the Game

You can't just say that a slot is about time-traveling tigers without some kind of story, and there's a good one here. Dr. Tigerstein is the leader of this crew, and he's a scientist who figured out how to go through time. This is tied into the gameplay since he'll take you through time as well with different features like free spins, mulitpliers and wild patterns in the different eras. These eras include Ancient Egypt, Medieval Europe and a Prehistoric Era with dinosaurs and other beasts.

The thing to understand about the gameplay style here is that it's really all over the place. The different eras that you travel through with the different tiger characters each have different styles, so you really have to be pretty flexible in what you like to get the most out of this title.

With that having been said, another way to look at it is to say that it's flexible in that it can appeal to virtually any kind of player out there. That's the interpretation that we prefer, but players who are super strict about the games they play might want to check it out a while to see how they feel about it anyway.

What's more about this release is that it's a GVC exclusive and won't be available right away at all sites that have Yggdrasil Gaming titles. That adds a certain degree of exclusivity to the title that's fun as well, and it shows that there's still some variety left in going from casino to casino in an industry where it can seem like every top site has games from dozens of top providers overall.