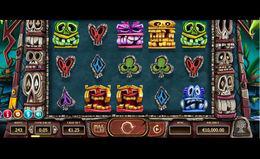 New game concepts don't happen all that much in the online slot world. At this point, it seems like just about everything that's going to be done has been done. While video slots offer a lot of flexibility in giving players different ways to get in on the action, the fact of the matter is that there are only so many spins that can be made on the same old options and features. Yggdrasil prefers to push the envelope and innovate, and they seem to have done that again with their Big Blox slot.

The main things that drives the gameplay in Yggdrasil's new game is the fact that a big block appears on every single spin. This is a larger symbol that starts off by covering a 2-by-2 space on the reels. Each normal "spot" it covers counts as having that same symbol, so that by itself makes it easier to hit winning combinations since it's essentially a cluster of the same symbol all beside of each other.

However, that's only part of the story. The block itself can expand vertically or horizontally to cover as much as the entire five-reel, three-row game area. As you can see, this is a tremendous amount of space that can be covered with big wins available. On top of that, this game uses the 243 ways format, so that only multiplies the potential wins even further. It's easy to see that this is an exciting feature, and it's understandable why players are so interested in this new online slot.

Something that is nice, but that we're not really all that surprised to see, is that this game is built using HTML5. That's what Yggdrasil uses for all of their games now, but it's important to note because several browsers are phasing out support for Adobe Flash right now. We've been saying for years that HTML5 was the platform of the future, and the end of days for Flash is just around the corner. Players will be able to find this game anywhere Yggdrasil's titles are available, including on sites that use the Microgaming Quickfire platform, since this company's games are available through that as well.