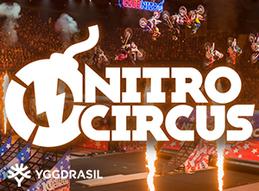 Yggdrasil Gaming has set up a deal recently that will get them into the branded slots space for the first time. This deal will have them produce a slot called Nitro Circus that will be based on the stunt company. The release is going to be particularly exciting, especially with the event going on that will be happening at the same time.

The You Got This Tour

The You Got This Tour is the fall tour from Nitro Circus, and it will coincide with the release of this slot. This deal is being lead by Nitro Circus co-founder Travis Pastrana, and he's known for being such a high-level stuntman that you know this game is going to be incredibly action-packed because nothing else will do for such a legend in this particular game. This is an exciting opportunity to see what Yggdrasil can do with a slot theme that no one else has really touched.

Later this year, the fall You Got This tour will be coming to six different European countries from November 20 to December 9, 2018. With the release of the slot coming around the same time, a serious co-promotion opportunity will be had, and that's the type of thing that takes the release a step ahead of what you normally see from this industry.

We have full confidence in Yggdrasil and their ability to produce a game that will live up to the hype of this deal, and we're really excited to see what they're able to come up with.

This software company is known for producing extremely high-quality online slots that are available through some of the top software platforms in the whole online casino industry. Players can find their titles at dozens of the best sites running today, and the upcoming Nitro Circus slot will be no exception. There's no release date set just yet, but they have announced that they are looking to release it around the same time that the above tour is going, so we anticipate sometime in October or November. Aside from that, they haven't released any new information about what it will be like in terms of features and layout.