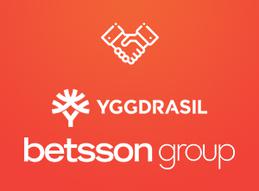 If you're familiar with the online slots industry, then you'll know that Yggdrasil Gaming puts out some pretty tremendous titles. They're known for really bringing it when it comes to great gameplay and graphics, and they've seen wider and wider distribution as a result of the quality of their games. They're now reaping the rewards of this even more with a new distribution deal extension with Betsson.

What's included in this deal is a set of releases in a number of new regulated markets. This list of markets includes Latvia, Spain, Denmark and Italy, and it puts Yggdrasil in a position to have their titles released all over different parts of Europe in some of the markets that aren't quite as popular compared to places like the United Kingdom and the Nordic countries, which tend to hog the spotlight because of how popular the industry is in those areas. As a result, plenty of players from these countries will get to see new Yggdrasil titles for the first time.

For Betsson, an important part of this is scaling things up. Things always have to advance at a regular pace in an industry as competitive as this one if you want to stay on top, and that's exactly what they're making sure they're doing with this deal extension. It makes complete and total sense for them to expand things to a greater level to get this excellent content available on their platforms in several jurisdictions as they open up. With so many regulated markets in Europe, there are a lot of different areas to cover from a business standpoint along these lines.

The Expansion of Yggdrasil Gaming

The thing about Yggdrasil is that they seem to be constantly expanding, even more than what you see from many other companies with a similar background. They're able to do things a bit better than much of the competition because their game quality just seems to come out at a higher level. A part of this is the fact that they focus on both gameplay and visual appeal, but several of their competitors only really put a lot of effort into one or the other. This helps them to resonate with fans on a much more serious level.