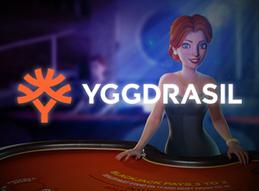 Yggdrasil Gaming is known primarily for their online slots, but they have recently announced that they are entering into the table games space. They are looking to really innovate in this particular genre, and they have some excellent ideas on how to make it happen. Table games are often thought of as being a bit boring by a lot of players, but all of that is about to change.

The first thing to understand is that online table games have long suffered from what some players would describe as being incredibly boring. What Yggdrasil is doing to combat that is creating a very immersive environment that includes 3D dealers with detailed motion capture animation. It also includes extra side bets and more options in games like blackjack, Baccarat and roulette, and this will give players more ways to try to win than what's typically available. The idea is to give the game a tremendous interface from both a functional and visual standpoint while also increasing how interesting the gameplay is.

Another aspect that they're tying into this that gets missed in online table games quite often is the level of social interaction that you typically see in land-based games. You'll have this in their new table games by being able to chat and interact with other players. It's an important feature because it's one of the biggest things that players complain about missing out on in the online experience, and while live dealer games facilitate this to a degree, there are a lot of problems with that particular platform.

This company is known for developing lots of high-quality online slots, and their push into the table game sector is fairly surprising. They are based in Malta, and they have offices all over Europe. They focus on an HTML5-based platform that makes their games "play well with others," and that has seen them get inclusion on platforms like Quickfire and EveryMatrix, which in turn has put their games in front of tons of players. This is a developer who definitely knows how to put together new ideas an innovate, as their numerous awards have shown over the years, and we're very excited to see how they fill out their table games numbers in 2018.