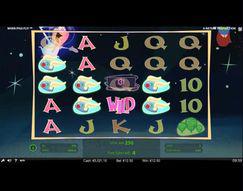 Something really interesting about Net Entertainment's online slot releases is that they tend to focus on traditional formats like 5x3 and 5x4. A lot of the competition has tried to open things up to other, atypical layouts for their games, but they still haven't been able to beat NetEnt in the process. A new game by this company called When Pigs Fly is a great example of how they can get out of their comfort zone by delivering something different than what they normally do and still show up other companies that call these atypical formats their wheelhouse.

How When Pigs Fly Works

The way this game works is that there are five reels. The first four reels, from left to right, have five rows each. However, the fifth and final reel only has three, much like a typical video slot. The key to this format here is that the game is an all-ways title, meaning you can win up to 3,125 ways. Add in the fact that there are a number of different bonus features and a balanced pay table, and you end up with a title with a really impressive hit-rate and a number of options to hit bigger payouts overall.

Net Entertainment has been extremely busy, and the release schedule that they've maintained lately really shows that. They have multiple new releases that have either just come out or that are about to like Jimi Hendrix, Theme Park: Tickets of Fortune and Nrvna. Add When Pigs Fly to that list, and you get a summer celebration of new online slots.

There's no denying that NetEnt is one of the top two or three online casino software developers in the world today in terms of the slots that they are producing now and over the past 12-18 months. In terms of quantity, they have been ramping things up more than they had in the past, but in terms of quality, it's hard for anyone else to really even come close. For now, you'll be able to enjoy When Pigs Fly with its atypical format and high hit-rate at your favorite NetEnt-powered online casinos.