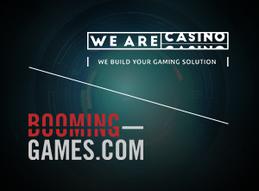 WeAreCasino has signed a deal recently that will see their games provided on the Booming Games platform. This will give them a significant boost to the number of players able to see their games, and it will put them in position to get a lot of attention from players who might want to focus on casinos in the future that offer their titles.

Details on This Deal

This deal is effective for the second quarter of 2018 for Italian operators. It'll include games like Indiana Cabbage, Fortune Valentine and Waikiki. Once all of their games have been integrated into the platform, they'll be held alongside many other names in the industry like Pragmatic Play and Playson, in addition to others. From there, the games will then be available on their platform as a whole for players in a lot of different areas to enjoy, giving them a pretty wide range of exposure.

The thing that's so cool about deals like this is that it's a massive win-win scenario for everyone involved. The players benefit because there are more great titles available at their favorite casinos. The casinos benefit because they get to offer players more options, which makes them more attractive. WeAreCasino benefits by having their games get more reach, and Booming Games benefits by being more competitive in the software and game aggregation markets. Seeing everyone in the scenario get a boost from this kind of deal is smart business, and it goes to show that companies in this industry can work together in an intelligent way to offer up great opportunities for players.

WeAreCasino makes some pretty interesting slot games, and what has stood out to a lot of industry experts about them is that they don't necessarily follow the same old thing when it comes to following the typical paths the industry has followed before. If they use an older style of theme, then they put their own twist on it. If they use older styles of features, then they spice it up with extras. Overall, their game portfolio isn't huge, but it shows a lot of promise, which you can easily see from how they're getting deals with big names like Booming Games.