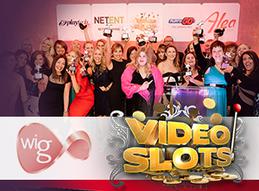 There are a lot of different gaming awards in the online gambling industry, and while many of them have different themes and concepts, The Women in Gaming Awards have been the most recent. Videoslots.com was able to have one of their employees win one of these awards for Hidden Talent of the Year. Sini Rantala picked up this award on May 12, 2017 as a part of the ceremony.

What Sini Rantala Does

Rantala is a Finnish content writer, and she was nominated by Videoslots.com for her professionalism in her work for crafting content for Finnish players. She's been working there since April 2016, and she was very happy with winning the award. She noted that the environment she has to work within for the casino gives her a great platform for putting out high-quality work, and she's looking forward to maintaining that position over the long run. That sounds like a great spot for her, and she was obviously thrilled with having been nominated by the company in the first place.

The Role of Award Ceremonies

It's critical for the online gambling industry to offer awards ceremonies and other recognition of this type so that players and industry figures can see who is doing a great job, as judged by their peers. While there are awards each year for the best online slots and other games, it's the awards for personnel that often get overlooked, which is unfortunate because they make the industry push forward just as much as the games and other content do.

About the Women in Gaming Awards

Known as the WIGs, this awards ceremony was created in 2010. It recognizes women who are both employees and who own their own companies in the gaming industry as a whole, and many feel that this type of thing is needed to encourage more women to become active in the industry, which has generally been seen as traditionally male in nature, especially on the land-based side. It's clear by these awards that there are a lot of those who deserve recognition as being among the best women in the industry, and it's great to see the WIGs giving them the level of recognition they deserve.