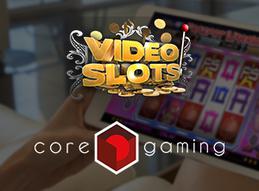 In the online slots industry, we have seen a bit of a cycle in what's important for online casinos. In the early days, simply having more games than the other guy was enough to give a site a pretty sizable advantage. From 2004 to 2010, the industry became much more about quality instead. Now we are shifting back to having the online slots world dominated by quantity while maintaining quality.

Videoslots.com is a great example of this approach, and they have added titles from CORE Gaming to further this cause in a new deal.

The Value of CORE Gaming Titles

CORE Gaming has two things going for them that make them an excellent addition to Videoslots.com. The first is that they produce all of their games in HTML5, which is the platform that everything is currently shifting over to. The second is that they produce extremely high-quality content with a focus on mobile, which is the exact type of game that this online casino has become known for. All-in-all, they are a perfect fit.

Details of the New Deal

This new deal has seen six titles from CORE added already, and three more are coming up soon. Beehive Bedlam and Pharaoh's Wild are among those already available. One or two new titles from the company will be added each month to give players a steady stream of new content while also making sure that this developer's titles don't get lost in the mix of the hundreds of high-quality games that they have available already.

Since 2011, this casino site has been focused on compiling a huge number of different slots from a variety of high-quality providers. Their base platform is based primarily on Microgaming Quickfire with titles from Net Entertainment, Rival Gaming, Playtech, BetSoft and tons of other providers added. You can play all of their games from your web browser, which gives them a high level of flexibility for their platform, and their mobile selection is extremely wide as well. Overall, CORE Gaming is an excellent fit into this site, and their games will definitely hang with the best in the world.