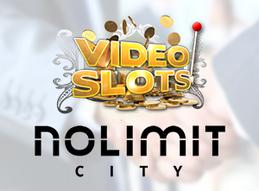 Videoslots.com has a great approach to how they run their operation: They want as many high-quality online slots as they can get. This is an operation that is based on making content distribution deals with as many solid developers as possible, and they've added yet another one to their list with Nolimit City.

This deal will see Videoslots.com pick up the entire portfolio of games from Nolimit City, an online slot developer that builds games in HTML5 for easy access on both desktop and mobile. This is a great addition because it fits in perfectly with the selection and platform that they already have in place, and it will see popular games like Space Arcade, Oktoberfest and Creepy Carnival end up in the mix. They are closing in on having 2,000 online slots, and this deal puts them that much closer to making that number a reality.

The key to the success that this online casino has seen is in the mix of quality and quantity that they have put together. Even though they have nearly 2,000 games, they don't just add new games for the sake of adding new games. Instead, all of their titles come from online casino software developers who have proven themselves over and over again in terms of making strong content, so they're able to mix both quality and quantity to create the largest mix of high-quality online slot content that you can find anywhere in the world.

Videoslots.com has been running since 2011, and as you can see from the above and the new deal with Nolimit City, they are serious about game selection. They also have innovated in the promotional side of things with their Battle of Slots and Casino Races concepts. On top of that, they know that they have to make sure that their players can trust them, so they have fast and reliable cash outs along with quick and friendly customer service. They have won some very important awards since opening their doors, and we expect them to continue dominating the online slots space with their approach.

Press Release, Award-Winning Online Casino Videoslots is Set to Go Live With Content From Nolimit City After STriking a Deal With the Stockholm-based Developer videoslots.com, April 10, 2017