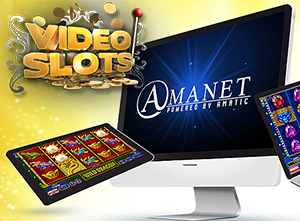 Known for its amazing selection of tons of high-quality online slots, Videoslots.com has followed through on yet another content distribution deal with a major name. This time, they will be offering content from AMANET, the online arm of AMATIC Industries, a particularly well-known provider of games in this particular sector. This deal will boost exposure for the slots while giving this online casino an even deeper selection of games.

What to Expect From These Titles

The online slots being offered in this deal are of a fairly high quality. AMANET focuses on bringing players high-quality experiences instead of trying to produce a large number of games, which results in their titles being very competitive in the larger market. Since this online casino is seemingly trying to take over the world by getting deals with every good online slot developer that exists, it's obvious that they fit right in when it comes to putting their games into such a large overall portfolio.

A key part of this deal that will be of particular interest to players is that many of the games that will be coming to this casino as a result of the deal have already been proven in the land-based arena. This is one of those cases where online versions of brick-and-mortar slots are going to be put in front of Internet players once again, and if history has told us anything on this subject, it's that if a game is popular in land-based establishments, it'll be just as popular online. This is the trend that we have seen for a long time, and there's no reason to expect anything different at this point in the game.

Videoslots.com has been open for business since 2011. Since then, their business strategy has been to basically add as many high-quality games as they can in the slot category, and this deal with AMANET is just another in a string of deals that we have seen on a regular basis since they first opened. They have one of the single largest selections of slots that you can find anywhere in the world, online or land-based, and that's particularly impressive.