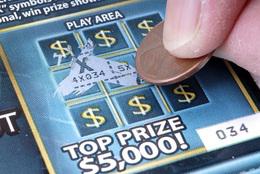 Online scratch cards in Internet casinos are an interesting genre of game. They have much higher payouts than their land-based counterparts, and they have similar themes and concepts. The basic ideas behind these games haven't really changed much since online gambling was first invented, and OMI Gaming is looking to change that. They have come out with a new release called Gold Bars and Rounds to start a genre that they are calling video scratch cards, and the idea is to shake up this particular genre of game.

Something that really drives the online gambling world is innovation. When one casino or software company comes up with a new way to play, the public decides if it's going to take off or not. If it does take off, then the competition has to scramble to come up with an answer to keep their market share from being taken over. As a result, the industry as a whole moves forward more towards what players like.

Scratch cards are an element of the online gambling industry that has largely been ignored. Throwing a brand on the face of the game is about as far as virtually any online casinos or software companies have gotten in doing more for this genre, and that's a problem because it doesn't address the core gameplay issues that could make these games appeal to a wider audience. Unlike slots, there just hasn't been much innovation because there hasn't really been a need for it in the eyes of the software companies. OMI's new Gold Bars and Rounds game is key in changing this perception.

Gold Bars and Rounds is the first of a new line of video scratch cards by OMI, and it offers an autoscratch feature as well as the ability to buy tickets in batches. What's really interesting about this game is that they have thought far enough ahead to make sure they can set it up for government-operated lotteries in a pre-batch format, but they can also operate the game based on a random number generator like what you find in online casinos. Not only is this game innovative, but it's also flexible, and that could mean a lot for the game in the long run.