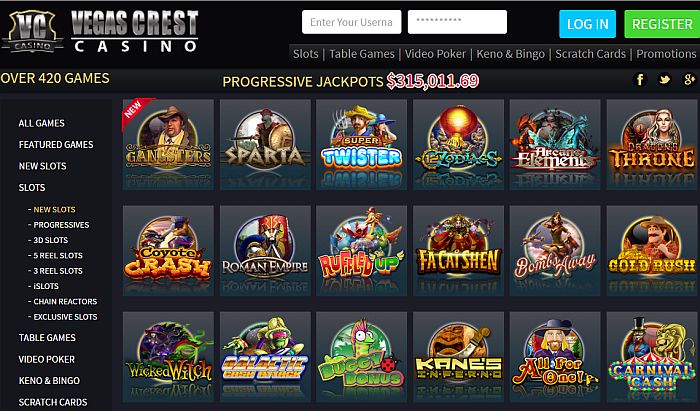 Online slots are by far the most popular type of online casino game in the world, and this is both by the total number of titles available and the number of people wagering on those games. Vegas Crest Casino is a site that really knows the importance of staying fresh with new titles, and they have added the portfolio of Habanero Systems online slots along these lines. This adds a few dozen new games to the lineup, which are all available in a special Habanero-specific lobby area of their platform.

The Habanero Systems titles added include Gangsters (their newest release), Sparta, Super Twister, 12 Zodiacs, Arcane Elements, Dragon's Throne, Coyote Crash, Roman Empire, Ruffled up, Fa Cai Shen, Bombs Away and more. All of their slot titles are available as a part of this new deal, and that gives players a lot of extra games to try with more than 40 games included. It's a great time to be a slots fan at Vegas Crest Casino right now.

Habanero has been seeing some pretty aggressive expansion in 2016. They've had a number of new online slot releases that have gotten them a lot of attention, and they've also been pushing to get their games in front of more and more players. They are the perfect example of what works in the current era of slots because even though they have a relatively small number of games, they can still get their titles in front of a lot of players by making deals with casinos that also use games from other providers.

This online casino has been running since 2014. They're licensed in Curacao, and they already offer titles from Rival Gaming, Saucify, BetSoft and Vista Gaming. With Habanero added to that list, they boast well over 400 total titles, which gives them plenty of games for players to choose from. What's more is that because they have games from multiple software vendors, this puts them in a position to get a lot of new releases throughout the year. Players will have plenty of opportunities to enjoy the newest titles because of this, and with such an expansive game selection, it'll be hard to run out of games to try.