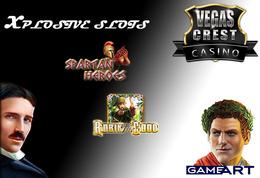 New games are an extremely important part of the growth of any online casino. The reason for this is that players can get bored with seeing the same old thing over and over, and that puts them in a position where they really need something new to maintain their interest. Vegas Crest Casino has taken measures to make sure that they start off into 2017 with plenty of new titles to get excited about thanks to a couple of new deals.

The first new deal comes thanks to a deal with GameArt. This is a company that has put a lot of work into their HTML5 slots, and this has put them in a position to be set for the future in a major way. They have more than 30 titles ready to go, and these games can be played on desktop or mobile for added flexibility. This only adds to the solid selection of games already available at this casino.

On top of that deal, a set of more than 15 new games have been added as well thanks to Xplosive. These video slots include mobile and desktop capabilities as well, and they are known for bringing a different style to games than what most other providers have available. While they are a smaller company that doesn't have as many available titles as most, they show a tremendous amount of promise, and the games they have available now are of a particularly high quality.

Vegas Crest Casino uses games from many different software companies to give players a great selection of titles to try. They are currently approaching 500 total games, and they have a solid selection on both desktop and mobile, and that includes both smartphones and tablets. They've shown with this pair of deals with Xplosive and GameArt that they care a lot about keeping players happy with something new, and it's a great start to the new year. Add in some very solid promotions and bonuses, and you have a great overall experience just waiting for players.