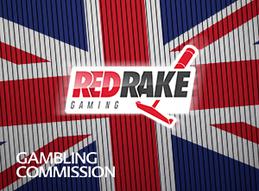 A license in the United Kingdom is one of the most important things that a casino software company can have. They are known for being one of the strictest jurisdictions out there, and they hold developers and operators accountable on a level like virtually no other. This is why it's such a big deal that Red Rake Gaming has received their license to operated in the UK.

When a developer has a large portfolio of already existing games, they often have to have each group of games certified one at a time to make sure that they meet the standards for a given regulatory body. That's exactly what has happened with Red Rake as the United Kingdom Gambling Commission has already certified an initial group of titles for meeting their standards. Another group of games is in the process of receiving the same type of certification, and once they're all ready, all of their titles will be able to be offered to players there.

The Importance of This License

Expanding in today's market is all about getting a foot in the door by way of licensing in various regulatory markets. Red Rake already has games available in Italy, Romania, Portugal and Spain (where they are based out of), and adding the United Kingdom to that list kicks them up to another level of legitimacy because it shows that their games have been verified to meet some of the most stringent standards found anywhere in the world.

As a result of this, they could find that they get verified easier in additional jurisdictions as time goes on.

What to Expect From Here

From February 5 through February 7, 2019, the ICE Totally Gaming trade show will be happening in London, and that's a fitting place to be for a company that just received their license to operate there. Big announcements from virtually all major software companies in the online casino industry can be seen here, and since Red Rake Gaming will have a booth at this show, we expect to hear something big from them that will set the tone for what they do in 2019.