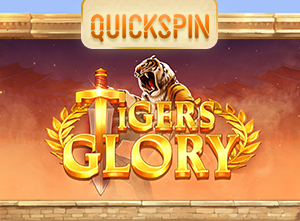 Something we've seen a lot from a variety of software providers over the years is that video slots based around older cultures and civilizations get a lot of interest. Quickspin has taken advantage of this with their most recent title Tiger's Glory.

The gladiator arena is where this takes place on a huge format with four rows of symbols and thousands of ways to win on each spin with an all-ways format. The name of the game comes from the tiger, which is the centerpiece of the free spins mode. You'll do battle with it, which was popular in different games in the gladiator arena fights.

The free spins mode gives you a chance to fight through a variety of battles to get more opportunities to win, and we think that this fits into the theme really well.

While a lot of different games have been produced in the past with Roman themes, we haven't really seen one in a while in the form of a new release from any of the more popular companies. Quickspin apparently thought that there was a void to be filled, and they did it in a way that it stands out in the sub-genre instead of just seeming like a boring copy of what's already available out there for players to enjoy.

Quickspin has already had a number of popular releases so far this year with names like Ark of Mystery, Big Bot Crew and Eastern Emeralds. They've been running since 2011, and in the past seven years, they have established themselves as a major name in the online slots world with games on several casinos thanks to being a content partner for the Microgaming Quickfire platform and a variety of other distributors. Their games are definitely in demand, and they know it just as well as their players do. It's because of this that we're sure that Tiger's Glory is going to do great.