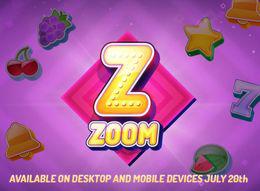 In the online slot world, one of the things that we see pretty often is that atypical slot formats are usually the result of a developer being somewhat lazy about trying to get attention and stand out. They often just rely on the game having an atypical layout to carry the entire gameplay. Thunderkick is great about always making sure all of their games have great levels of both graphics and gameplay, so even though they have a different type for format here, they've still incorporated a number of features to make it a great experience.

In an extremely atypical format, this game has six reels with four rows. This creates a grid of six different areas that are 2x2 symbols each, and these are called Zoom Areas in this online slot. If you get a Zoom Symbol in one of these areas, then it will expand to cover the entire Zoom Area with a single symbol, and you get a re-spin along these lines. That makes it a lot easier to hit winning combinations on the 64 paylines that this title has available.

Something that makes this even more interesting is that you'll continue to get free spins for every new Zoom Symbol that you get on the reels. If you get four Zoom Symbols in a square formation, they will all combine to make a Super Zoom Area of just one symbol that covers a 4x4 part of the grid, which is two-thirds of the entire screen real estate. Obviously, it's easy to see how you can run up some major wins with this feature.

Another aspect of this release by Thunderkick is that it will most likely be released on the Microgaming Quickfire platform as well. This is a key piece of the situation because it will give more players all over the world a chance to take part in this atypical game and give feedback. This type of structure could catch on and be the catalyst for other types of games with similar formats, but we'll have to see what happens. For now, we know that this new Zoom slot is a pretty big deal for Thunderkick, and players will be very pleased with the gameplay of this title.