SuperLenny Casino Closing Its Doors at the End of 2018 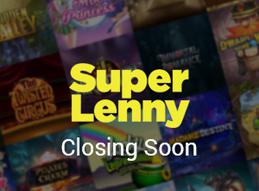 Something that's particularly interesting about the online casino industry is that it's constantly in a state of flux. Regulations in particular change all the time, even within jurisdictions that have been established for a period of time.

What Happens to Existing Players?

Players who have accounts at SuperLenny will have their accounts mitigated over to one of the other GiG-owned casino sites. These sites have pretty much the same software, games and platforms, so it'll be a pretty easy transition. The exception to this will be if the player already has an account at the site they would have been moved to, in which case they will just need to log in on that account if they want to continue playing.

A variety of sites are owned and operated by GiG like Kaboo Casino and Rizk Casino. Rizk in particular is known for giving players a tremendous amount of value through its superhero progression system, which in turn leads to lots of opportunities for free spins, bonuses and other offers.

The State of the Industry

This doesn't really reflect the state of the industry all that well. If anything, it reflects that the Gaming Innovation Group knows exactly what they're doing when it comes to taking care of their players and not overextending themselves to managing too many sites. That's the sort of thing that will hurt the player experience because of support and other staff being stretched too thin, so this closing is ultimately a good thing for players.

On top of that, it will put GiG in a position to get suited to the changes in regulations and continue to build on their already popular sites, Rizk and Kaboo in particular, instead of putting more resources into sites that haven't been as popular from a brand perspective.

Press Release, SuperLenny to Close Down as a Casino gigaffiliates.com, October 9, 2018