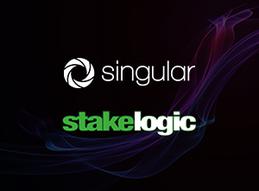 Stakelogic has notably expanded its distribution network after signing an agreement with online casino and sports betting platform operator, Singular. Classic slots and modern video slots from Stakelogic are now offered to over 500 online casino operators and through eight aggregators and this collaboration secures that more providers access to their games. This partnership includes a full set of popular video slots from and according to the deal, games such as Book of Adventure, Book of Cleopatra, and Flappers are included, plus popular games such as The Legend of Hercules, The Expendables Megaways and will be delivered to Singular's operating partners.

Olga Bajela, Sales Director of Stakelogic, said: “We are proud of the incredible distribution network we have built over the past few years and the addition of Singular means we can make our games available to more operators and players than ever before. Singular provides a cutting-edge platform and service offering to online casino and sportsbook operators and we are delighted to see them line up alongside some of the most esteemed and successful game providers in the market.”

Robert Dowling, Chief Commercial Officer at Singular, said: “We have built our reputation on our state-of-the-art technology but also on the incredible game portfolio we offer to our casino and sportsbook partners, which features some of the biggest developers in the industry. Stakelogic is blazing a trail right now with its classic slots and modern video slots, and it was a must have addition to our portfolio. We believe the developer will be a big hit with our operators and their players and look forward to a long and successful partnership together.”

The brand was founded in 2014 with main offices in Malta and the Netherlands. Stakelogic has launched some great games which include its creative slots with 360° technology and 3D graphics. The operator also delivers its mobile gaming platform, which aims to improve the gaming experience by providing the same quality of play as the desktop versions. The titles provided by the vendor are fully responsive and built using HTML5 technology, compatible with all major software platforms and devices, including Android, iOS and Windows. The company has 10 licenses, and they distribute games in various countries across the globe. It is also ISO27001 certified, which indicates a high level of security.