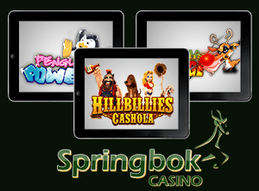 A set of three mobile slots have been added to the lineup at Springbok Casino, and this gives players even more options than they already had available. They're all about adding more content every single month, and you can see that in a major way with this set of mobile options that are available now.

The first of the three new mobile additions is Hillbillies Cashola, a video slot that is centered around a bunch of mountain folks. You'll see moonshine, livestock and hound dogs on the reels with 20 paylines of action, and you can earn multipliers worth 2x or 5x. These combine for total multipliers as high as 20x as well, and there are free spins available too.

Next up is Penguin Power. This is centered around a virtual trip to Antarctica, where you'll see lots of penguins and other sea-based creatures like seahorses. Penguin eggs show up on the reels as well, and players can use the scattered igloo symbol to get up to 25 free spins.

Finally, we have Rudolph's Revenge. This is a Christmas-themed slot, but it doesn't have to be the holiday season to get a ton of value from it. You can pick up some pretty serious wins, including a sizable progressive jackpot that you earn by getting five of the Rudolph symbol on an activated payline. There are free spins, multipliers, scatters and other features in this game to help you hit some big wins.

The Future of Mobile Gaming

Springbok Casino's selection of added mobile games is a great example of something that we've seen quite a bit of, and that's a shift towards as much mobile content as reasonably possible. They've been in operation since 2012, and as one of South Africa's most popular online casinos, they've still been able to build up a fanbase of players from all over the globe.

Their solid selection of titles from Realtime Gaming, including their focus on high-quality, mobile content, is a big reason for this. It's also indicative of the future of mobile gaming as well where players are inching towards enjoying their play on smartphones and tablets more than they do on desktops.