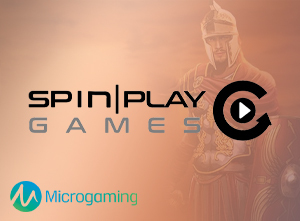 Another perspective studio joins the ranks of Microgaming’s partner – Las Vegas-based SpinPlay Games. The developer’s team founded by a team of mathematicians with decades of industry experience focuses on balancing intricate mathematical models with the design process and aesthetic personality to develop engaging gameplay experiences for players.

…the studio managed to attract the attention of the slot king itself. Known for its wide web of esteemed collaboration, Microgaming signed an exclusive supply deal with the emerging brand.

According to the agreement...

…SpinPlay will be joining the large base of its new partner’ss independend studios and partners. Alongside partnership with leading gambling software providers, Microgaming has a special collaboration program with many new game studios on an exclusive basis, such as Stormcraft Studios or Triple Edge Studios. This allows the company to bring even wider selection and innovation and deliver the very best gaming experiences to its operators and their players.

Judging by the statement of Andrew Clucas, Chief Operating Officer at Microgaming, the company is quite pleased with the new addition:

“Joining our diversely talented network of content partners, SpinPlay Games employ a mathematics-based approach in pursuit of delivering uniquely creative and playable games, with Roman Power forming the vanguard of a feature-rich line-up of upcoming new content. We welcome the team on board,” commented Clucas.

SpinPlay Games is also thrilled about the latest deal, as its CEO, Anton Kuhlmann, comments:

“Collaborating with Microgaming is a real honor, and we are extremely proud to join its lineup of world-class content partners. We focus on holistic design where our themes, sounds and animations come together with our fine-tuned math models to deliver fun and rewarding gameplay experiences.”

While it has just emerged in the gambling industry last year...

…SpinPlay made quite a mark with just a tease of its debuting title – Roman Power slot. A five-by-three, 20-payline slot ignited with fiery multipliers and an expanding Hero Wild feature showed the market there’s a new hot studio in town.

Players will be able to explore the title’s empire of riches from its grand launch on 18 June 2020. The release will be exclusively delivered onto Microgaming’s content aggregation platform as part of its slots selection.

It will become a part of the wealth of new games introduced throughout the year...

...by the supplier’s diverse roster of exclusive independent studios and content partners, which are able to access more than 800 online gaming brands in over 20 regulated markets.

Kuhlmann commented about the Roman Power slot and the next title in the brand’s production line:

“Our debut title Roman Power is a high-volatility game with both theme and math targeted at more experienced players. This game offers huge win potential on every spin through the combination of stacked symbols, expanding wilds and multipliers. We look forward to releasing additional exclusive titles, including our second game Almighty Aztec, through Microgaming’s leading content aggregation platform in the near future.”