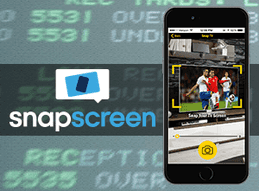 Technology keeps pushing us forward more and more in the gambling world, particularly online, and there's an app that's starting to get a fair amount of attention called Snapscreen that's the natural continuation of the upward pressure of technology in betting. Snapscreen calls itself the Shazam of betting, and the idea is that you can point it to the screen of a game that you're watching to have relevant bets made available to you right away. It's a pretty cool technology that obviously has a lot of potential in the industry.

Why the Shazam Comparisons?

Shazam is a popular mobile app that can determine where music or a song is from with information like the name of the song, the name of the artist, the album (if applicable), etc., along with a link to buy the song. The idea is that Snapscreen gives people a visual approach with the same idea with regards to sports betting, so you can point the screen at any ongoing sports event on a television or computer screen, and the relevant betting information will come up for that game.

Motivation for the Concept

The motivation for the concept came from the simple fact that it's really difficult to pick up sounds in a bar type of atmosphere because of all of the noise, music and whatever else is going on. A visual approach makes much more sense, and that's what they decided to go with. The approach makes a lot of sense, especially since there are a lot more visual clues than audio ones when it comes to identifying a game or match.

Snapscreen has both iOS and Android native apps available. While that covers the majority of the market, they have also put together a fully functional HTML5 app that makes it easy for players to connect and use the app no matter what kind of mobile device they have. It's a really smart way to prepare for the future since HTML5 is the platform that everyone is migrating to, and it helps to expose them to as much of the market from the player end as possible.