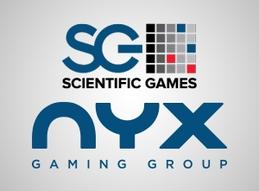 Las Vegas-based world lottery and casino gaming giant, Scientific Games Corp (NASDAQ:SGMS) has announced it will acquire Canadian gaming group NYX (NASDAQ:NXXYF) for about $632 million which will greatly expand the company's current digital and online gaming portfolio. The sale price was a slight premium on the price of NYX shares yesterday which opened and closed at 0.94 after remaining virtually flat for over a month. The announcement did little to change the price of SciGames shares which started the day at 43.40 and closed a little lower with a brief peak in after-hours trading.

The deal is said to be funded through a mixture of cash and debt and expected to close in the first quarter of 2018 according to a brief press release issued by both companies. The announcement comes about two months after SciGames announced they would be picking up Red7Mobile, a UK based mobile, and desktop game developer. The price for that deal was not announced.

A more detailed description of the transaction is available on the Scientific Games website under Investor News. In that statement, the company lauds NYX as, "One of the fastest growing B2B real-money digital gaming and sports betting platforms in the world, will form an industry-leading force across iGaming, iLottery and Sports."

The company also referred to OpenBet Sportsbook which NYX acquired in May 2016. OpenBet was founded in 1996 and themselves consumed leading UK online interactive game developer Electracade in 2008 when the purchasing company was known as Orbis and the platform was referred to as OpenBet. The Orbis platform was pioneering in the deliverance of multi-developer games to casinos and was the first to offer packages of mixed developer games in a time when casinos outside of sports books were almost all driven by a single gaming software and usually only on that developer's platform. Now almost all gaming platforms and casinos operate on a similar model.

NYX also began a rampage of acquisitions before anyone else in the industry, establishing themselves as a game developer and supplier without ever actually deploying the games on the open market before beginning to their M&A phase. The telling moment that NYX was a serious contender in the digital gaming sphere came when it was announced they would be acquiring Australian game developer NextGen Gaming Party Ltd., giving NYX a catalog of over 300 well-known gaming titles distributed to more than 40 global customers. Most of those games were known at the time as Cryptologic, Vegas Technology (now WGS) or Party Gaming.

While the acquisition comes nowhere near the dollar value of Amaya's (now The Stars Group) Rational Group purchase for $4.9 billion, or GTECH's acquisition of land and online industry giant IGT for $6.4b, it does give SciGames a leg up in the digital and online sphere against their international rival and could be counted as one of the most important acquisitions of the decade in that regard.