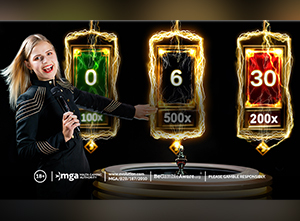 An exclusive deal was reached between Evolution Gaming and Scientific Games to transform the live Lightning Roulette game into a classic game in real-world casinos around the globe. According to the deal, Live Evolution Lightning Roulette will be available for Scientific Games land-based casinos around the world. This will be the first of its games to complement Dual Play Roulette and Baccarat, which are live casino tables that will be streamed onto land. Released online in 2018, Lightning Roulette is a traditional TV show-style roulette that combines live and advanced gameplay with an RNG. As part of the traditional game, Lightning Roulette adds very lucrative "Lucky Number" wins with every spin. They are in the form of rays that light up specific numbers to multiply the winnings.

The ongoing partnership between the companies has significantly grown, especially in the markets of Europe, Canada, and America. Evolution's live casino content is part of the Scientific Games platform!

Todd Haushalter, Chief Product Officer at Evolution, said:“Lightning Roulette has been the biggest table game in online casino for years and we are thrilled to have Scientific Games bring it to land-based casinos. This gets us one step closer to letting players find Lightning Roulette everywhere they want to play. At Evolution, we have millions of players who enjoy the game, so there should be an instant fan base who are ready to play at their local casino when given the chance.”

Rob Bone, Senior Vice President of Global Systems and Table Games at Scientific Games, commented:“We have watched Lightning Roulette’s phenomenal success in a live-dealer, online format and cannot wait to make it available on the gaming floors of land-based casinos across North America and around the world.”

More on the iGaming Provider

Scientific Games is a leading casino supplier that develops a wide range of popular content for casinos around the world. This brand holds a significant market share in the iGaming industry and this company is constantly creating exciting games, which is the reason why most online casino operators want to integrate them on their sites.

The company has over 50 high-quality slots, all developed by industry experts. The commercial division that works with the online casino content always guarantees the best games that keep players more engaged. It was originally founded in 1943 and has huge experience in the gaming industry and this brand had a big influence in revolutionizing the industry. It has won several gaming awards, in September 2016, they received the Global Gaming Award for Innovation of the Year for land-based gaming.