Rights to Conan Brand Secured by NetEnt for Future Slots 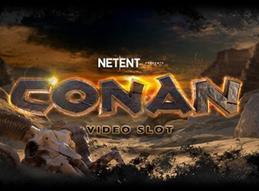 Net Entertainment has a great reputation when it comes to branded slots. They produce some of their best work based around ideas and concepts that come from popular brands in various types of media, and a recent deal shows that they will be doing it again sooner rather than later. It's been announced that they have secured the right to the Conan character and brand, and they will be using it to produce online slots in the future.

Conan is known for being a comic book and movie hero, and he was famously played by Arnold Schwarzenegger in a pair of movies by the same name that helped to launch his acting career because of how incredibly popular they were. With a fantasy theme that has a sorcery, swords and war set of motifs, it's pretty easy to see that Net Entertainment has a lot to work with when it comes to bringing this name to the reels in a big way.

This deal includes rights to the characters, storylines, concepts and universe that Conan resides in, but it's unclear if they will have rights to movie footage or anything along those lines. It's largely irrelevant at this point because we know that they are so good that they can create something amazing all on their own with this brand.

Picking Up Momentum for 2019

It's no secret that Net Entertainment always has a hard time outperforming themselves as they try to make each year better than the last. That's a huge task to undertake because they're simply so good to begin with. This announcement shows that they have some major plans for later this year, and while no concrete release dates were mentioned, we definitely won't be surprised if we see a new game or two hit casinos by this fall based on the Conan character and stories.

Until then, we're going to have to sit and wait, but we are very much anticipating what they do with this. It's an exciting time to be an online slots fan with NetEnt teasing out what they will be releasing in the future.