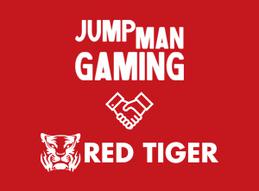 Game selection is really important for players in today's online gambling industry, whether it's casino, bingo, poker or any other sector. What we've seen in response to that is a variety of deals that has different companies sharing content to create win-win situations. In a recent deal like this, it's been announced that Jumpman Gaming will be hosting titles from Red Tiger Gaming, which will open up their portfolio in a serious way.

The main thing that most players are going to notice is that a lot of Red Tiger Gaming slots are going to be available at Jumpman-powered casinos and bingo rooms. This includes their "Smart Spins" platform for bonuses based on slot play that has gotten them so much attention from players who like to really focus on maximizing the amount of value that they get for promotions. This is frequently difficult to pull off for slots fans, but this program has made it much easier.

Other Aspects of the Deal

Something that a lot of people don't realize is that deals like this have a number of benefits for everyone involved:

These deals are a critical part of the current state of the online gambling industry because of how much they help everyone involved.

Red Tiger Gaming has been doing extremely well in 2018. At this year's EGR B2B awards, they were able to take down the RNG Casino Supplier of the Year category as well as Mobile Supplier of the Year, both of which are very tough categories with very strong competition. On top of that, some of their slots have won individual awards as well, and that shows they have both quality and quantity when it comes to their slot offering. That's exactly what Jumpman is looking for in expanding their portfolio.