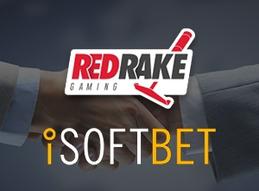 Red Rake Gaming, a Valencia-based HTML5 slot and software developer has announced an agreement with iSoftBet of London. The strategic deal will see all of Red Rake's video slots and video bingos integrated into the iSoftBet Game Aggregation Platform (GAP) for distribution across regulated online gaming markets in European.

Red Rake Gaming's latest game was released under the title Eastern Goddesses in early September. The launch added to more than 30 existing real money games currently available online. The agreement announced today will extend the developer's reach even further with their new position on the iSoftBet platform.

Red Rake Gaming business development head, Carlos Fernández said: "For such a young company like Red Rake Gaming this partnership with iSoftBet is a true milestone and helps us in our ultimate goal of providing our innovative and first-quality content to the biggest e-gaming operators," according to press released today by the company.

Games Destined For Spain And Rest Of Europe

Michael Probert, iSoftbet business development boss stated that Red Rake Gaming creates 'extremely engaging casino games' and is helping iSoftBet reach their goal of adding market-specific, best-performing content in regulated markets. He added: "We are sure that our growing lists of top class customers are going to enjoy the new content and we look forward to distributing them further in Spain and through Europe."

Some of Red Rake's content was originally developed for social applications. Their current development portfolio boasts more than 50 slots and about a dozen video bingo games. Their groundbreaking release of Wildcano in May 2017 marked the first-ever Orbital Reels game, a company trademark. The slot features circular reels, 8 compulsory pay lines, 4 special features inside the base game, and a free spins bonus round. The company's HTML5 games for mobile and desktop are delivered in 16 languages and support more than 100 currencies.

iSoftBet launched in 2010 with 300 games already under development from a previous software iteration. Many of their video slots and progressive jackpot games are branded titles such as Paranormal Activity, Platoon, Basic Instinct, and Jackpot Rango. They also develop innovative games like Slammin 7s and offer unique 3rd party content such as that from Red Rake Gaming and many others.