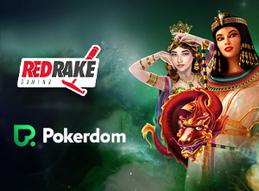 Casino operator, Red Rake Gaming (RRG), has grown its presence in the Eastern European market following a partnership with Pokerdom, which it praises as one of the biggest providers in the region. As a result of this deal, the provider from Spain and Malta will distribute its lobby of slot games to Joker Online and Pokerdom. Red Rake Gaming continues to push the limits with new gaming concepts based on the experience of players in the game development cycle. This resulted in constant growth and expansion of the provider, and all major casino operators have the games from this brand.

According to the Deal

RRG will integrate popular games such as Lorelei's Pearls Diamond Cascade, Million 777 and Wild Animals. This is the latest in a series of business partnerships for the developer, and the deal follows in the agreement with Betway, Rivalo, Ously Games and BetVictor.

Julia Vaskovych, marketing director of Pokerdom, said:“Pokerdom offers its users only the best games from the leading slot games developers on the market. And we’re delighted that our collection will be expanded by the premium games from Red Rake.”

Nick Barr, managing director for Red Rake Malta, commented on the partnership stating:“We are extremely pleased to welcome Pokerdom to the Red Rake Gaming family. There are many synergies between the companies in terms of market reach and we have high confidence that our games will resonate well with Pokerdom’s players, as demonstrated through our existing presence and strength in these markets.”

Red Rake is a casino developer founded in 2011. Social casinos and real money games are part of the provider’s offer. The company has offices in Valencia and Spain. Its games are available in multiple languages French, Danish, English, Dutch, Norwegian, Japanese, Italian, German, Spanish, Portuguese, Russian and Swedish, which makes the product available almost for everyone. Also, the company creates games using the latest technologies available. For example, all the games can be played on desktop and mobile devices, which includes Android, iOS and Desktop platforms.