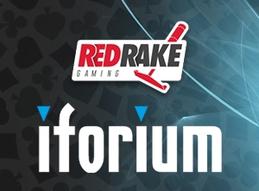 As the landscape shifts and the battle for dominance or even a niche in the casino game aggregator platform market heats up, Iforium has added Red Rake Gaming to the more than 50 providers already found on its Gameflex platform.

Red Rake is most well-known in the Spanish market but has expanded their footprint over the last 6 years and now have over 50 slot titles for real money play. The games are distributed over a number of platforms and the Iforium Gameflex integration expands their reach even further. In addition to casinos served by Iforium, you can find Red Rake Gaming slots at Frank Casino, Vera&John, and many other high quality properties.

Iforium CEO, Phil Parry confirmed the launch today, saying he was thrilled about the development. He noted some of Red Rake's most popular titles such as Ryan O’Bryan, Super 10 Stars, and their newest release,  Asp of Cleopatra. He added: "I'm sure our Gameflex partners will move quickly to get Red Rake’s innovative games in front of their players!"

Commitment to Keep Growing and Expanding

Red Rake Gaming Head of Business, Carlos Fernández Aguilar spoke of his company's goal to make their games available to the industry's biggest operators and said that deals like this bring them closer to achieving it. He was also delighted with the deal and added: "2017 was a great year for us and starting this new year with a partnership with iForium demonstrates our commitment to keep growing and expanding our reach," according to a press release from the company.

Iforium was founded in 2006 and has their headquarters in Douglas, Isle of Man. Their Gameflex aggregator platform delivers games from top providers including the Microgaming Quickfire portfolio of legacy games and new titles from small innovative studios. In all there are more than 50 vendors plugged in, offering more than 5,000 games for mobile and desktop. Gameflex is easily connected in a single instance with seamless API integration.