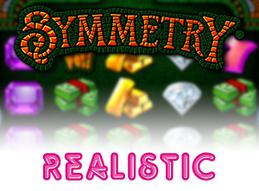 Realistic Games produces a lot of great online slots, and they have announced yet another with Symmetry. This slot uses five reels with ten paylines, and it's based on a theme that we haven't really seen much of before. There are different tiles that make various patterns in this game, and it's a great example of using a seemingly straightforward concept and turning it into a high-quality video slot.

The Symmetry bonus round is one of the key features of this video slot, and it's centered around lining up all five reels with stacks of three matching symbols. Note that the symbols themselves don't have to be the same on each reel, but each reel has to include three identical symbols on a per-reel basis. This gets you a random jackpot, which can be worth as much as 500 times your total bet, which would be like a 5,000x line bet win considering there are 10 paylines available in this game.

It's important to note that this will be Realistic Games' first release that's HTML5-only. HTML5 has been slowly but surely taking over Flash as the number one platform for new online slot releases, and this means you'll be able to play the same version of this game on both desktop and mobile devices. The controls are handled in a really smart way to maximize screen real estate, even on devices with small screens, so you'll have a chance to get in on the action without having to feel like your game experience is particularly crowded.

State of the Slots Industry

The online slots industry as a whole is really building up a ton of steam, and this is the result of the upward pressure that we're getting from all of the great competition going on between the best content creators in the online casino industry. Realistic Games is throwing its hat in the arena with Symmetry, showing how they can produce high-quality titles without needing backing from big names from movies or television shows because for them, it all comes down to great visuals and strong gameplay elements.