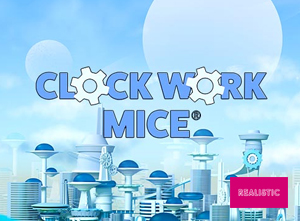 The newest Realistic Games slot is a title called Clockwork Mice that has been released recently during the first half of July. The idea behind this game is that you're seeing a futuristic city type of theme with smooth graphics and a great gameplay style with a medium level of volatility thanks to a feature set that drives a ton of action.

The format of this game offers a simple 20 paylines across five reels with three rows. It's designed primarily around a set of clocks that can give multipliers depending on the time on those clocks during a free spins bonus feature. Along these lines, the multipliers are worth as much as 12x, which sets you up to have opportunities to take down some pretty tremendous prizes. It's easy to see how such a top-heavy bonus round could drive the volatility up a bit, but the rest of the pay table is pretty balanced, which helps to keep it from getting out of control.

Because this game is produced in HTML5, it works well on pretty much any device whether it's on a computer, smartphone or tablet. The mobile version has a slightly different interface to accommodate smaller screen sizes, and it even has controls on both sides of the screen to make it easier to play with either hand. That's a smart design concept that helps to prevent situations where it's awkward to reach all the way across your phone to hit a button that's not in a convenient location.

Realistic Games is really tearing it up this year with big releases like Slot It In! and Black Ice, both of which were launched a couple of months ago. They've recently announced that they're going to be pushing more on the table games side of things in August with a 3D roulette release, and that goes to show that they're flexible in what they bring to the table as well. That's something that companies who we think of as slot providers are starting to do more and more to diversify what they have to offer, and it's no surprise that they're one of the companies leading the way.

Press Release, Blast Off Into The Futuristic World of Clockwork Mice squareintheair.com, July 2, 2018