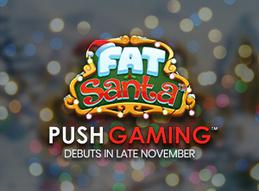 Keeping with the spirit of the holiday season, Push Gaming is going to be releasing an adorably festive new slot called Fat Santa on November 27, 2018. This new game will be packed full of holiday treats and generous wins that will appeal to anyone wishing to indulge in the season.

This bright and merry game features five reels, five rows and 50 pay lines. All of the symbols are festive and fun, and the game performs beautifully on both desktop and mobile. Players can enjoy a cheery soundtrack along with colorful ornaments, chubby-cheeked elves, Christmas pies, shiny presents and, of course, a delightfully fat Santa Claus.

As players spin the reels, there's a chance that Santa Claus will come by on his sleigh and throw snowballs that melt to reveal the wild Christmas pie symbol.

Every time players get the Christmas pie wild symbols on the reels, they automatically receive generous wins. If the pies appear alongside the Santa symbol, a free spin bonus feature is triggered.

During each free spin session, players have the opportunity to collect additional Christmas pies on the reels in order to fill up a meter that feeds Santa. Every pie collected increases Santa's size, and collecting five pies during the five free spins means that Santa expands to a 5 by 5 size to cover the entire set of reels. This fully fed Santa gives a guaranteed 1,000x return on the initial bet.

In addition to triggering this fun and lucrative bonus game through the natural course of play, Fat Santa also has a "Buy" feature located beneath the reels that gives players the option to bypass the waiting period and skip straight to the free spin bonus game to rack up bigger wins as quickly as possible.

Push Gaming is an online gaming software development company established in 2010. The firm is located in London and licensed to operate in the United Kingdom. They primarily focus on cultivating a library of popular slots, bingo and casino titles.

The company is most widely known for its development of quality mobile content following the industry shift towards mobile gaming. They have since begun to specialize in HTML5 games that are optimized to provide a flawless gaming experience on both mobile and desktop browsers.

Push Gaming was founded by a group of well-known industry professionals who spent time with companies like the Amaya Gaming Group and International Game Technology, and they currently partner with some of the largest operators in the online gaming industry.

Press Release, Fat Santa is on His Way pushgaming.com, November 3, 2018