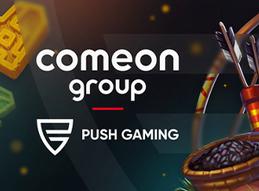 Push Gaming, a London-based casino games developer, has announced a new partnership with leading online gambling operator, ComeOn Group. Under the terms of the agreement, the developer will supply its market-leading content to ComeOn's brands. The deal represents a significant expansion for Push Gaming as they are now supplying their games to some of the world's most successful online casinos. According to the deal, ComeOn acquired Push's online slots such as Jammin' Jars 2, Dinopolis, Land of Zenith, Fire Hopper, Bison Battle, and its upcoming Big Bamboo.

The deal is the latest in a string of partnerships that Push has announced in the first few weeks of 2022, with 888 Casino and Scientific Games already on board.

Fiona Hickey, Head of Sales at Push Gaming said: “It’s been a busy first few weeks of the year for our European growth and we’re certainly not stopping here! Maintaining this momentum and replicating it in other major global territories is key for our growth plans this year and with the success, we’re enjoying with our games we’re excited at the prospects for 2022.”

Cristiano Blanco, Chief Product Officer at ComeOn Group, added: “It’s a delight to have the quality of games available to our players that Push provides. Its success as a studio reflects our own growth and with games like the Jammin’ Jars series, Razor Shark and its upcoming titles.”

About the London Slot Developer

Push Gaming is an online casino gaming software developer with main offices in London. The brand seeks to combine and broadcast traditional gaming products for online casinos and mobile player platforms. The supplier is committed to bringing the slot machine industry to the next level by creating high-quality products. James Marshall and Winston Lee are the brains behind Push Gaming. The studio was launched in 2010 and has generated excellent titles such as Blaze of Ra and Jammin Jars. The company operates under licenses issued by the Alderney Gambling Control Commission and the United Kingdom Gambling Commission. Players can be sure that they have taken all required steps to maintain fair play in accordance with the laws. The company has a constantly expanding lobby of games filled with games that are fully optimized for mobile devices. They are winners of significant awards, and they won the award for Jammin’ Jars for the best high-volatility title.