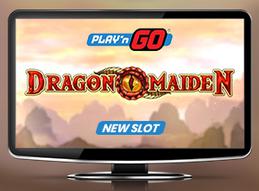 Dragon Maiden, the latest video slot release from Play'n Go, is a fiery, medieval game centered around Geneth, the titular Dragon Maiden, and her mighty dragon.

As mentioned above, the game is based around Geneth, the beautiful and mysterious Dragon Maiden with flaming eyes and flowing hair. She and her fire-breathing dragon are the keys to landing huge payouts in this slot.

Dragon Maiden has five reels and three rows, and wins pay out from left to right. Players must match three, four or five symbols along one of the 243 pay lines in order to win.

The game plays a distinctive sound whenever the dragon or the Maiden appear on the reels to signal that the potential for big wins and bonuses is on the horizon. In addition, the images are animated and highly detailed, and the background music is both absorbing and dramatic.

The Maiden acts as the wild symbol for the game, and she has a chance to expand up to three tiles for additional earnings. The dragon is the game's scatter symbol, but it also triggers the free spin bonus when three or more symbols appear on the reels.

During the free spins, any dragons that land on the reels are held in place and raise the height of that reel by one. Any reels that reach six rows in height will trigger a Golden Spin. During Golden Spins, all of the reels expand to six rows for 7,776 ways to win, and players will have the opportunity to receive up to 5,000 times their initial bet.

Play'n GO is a developer of online gaming software that has been in the industry for decades. While the company is based in Sweden, they also have offices Hungary and Malta. They are licensed to operate through the jurisdiction of Malta as well, which means that they are a fair and trustworthy software provider.

The company partners with other big-name brands in the online casino industry such as bet365, Betsafe Casino, NordicBet and Mr. Green. While they offer beautifully designed poker and table games, their impressive catalog of slots is truly noteworthy.

All of their video slot titles feature stunning graphics, thoughtfully designed reels and soundtracks that keep players feeling engaged and energized throughout their play sessions.