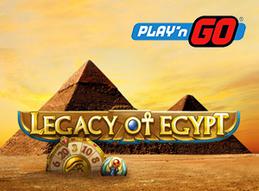 Just when players thought that there were a ton of online slots that use Egyptian themes, Play'n Go has come along to show that there's even more that can be squeezed out of the concept. They've done this with their new Legacy of Egypt slot, and the idea here is to offer players a gameplay experience that's fun with different types of features and a visually appealing title that is easy on the eyes.

This game has five reels, three rows and 30 paylines. A wide range of bet sizes are available starting down at the $0.30 per spin level. The scarab is a wild symbol, and the pyramid is a scatter that gives payouts. It also awards free spins. During those free spins, the pyramids act as extra wilds, but your free spins will also get a multiplier added on to give you even more value.

During this feature, getting at least two pyramids on the reels at the same time will trigger what they call the Pyramid Spins feature. You can get a random number of these worth up to eight total, and they also get the multiplier that you were given for the regular free spins mode. Three or more of the scatters will offer a re-trigger by doubling your number of free spins and the multiplier, and that's obviously a ton of value waiting to happen. Overall, this is a fun, multi-layered bonus round that adds more depth than what you typically see with free spins modes.

What Players Can Expect

If you're the type of player who likes new and fresh themes, don't be quick to discard Legacy of Egypt simply because it uses Egyptian motifs. The gameplay is the real focus here, especially between the balanced pay table and the in-depth free spins feature with multiple levels. It's the kind of thing that can be a lot of fun for many types of players, and it's got a low enough volatility that you won't have to worry about many big swings. Play'n Go has done a great job of putting this title together overall. This game comes out on April 25, 2018.