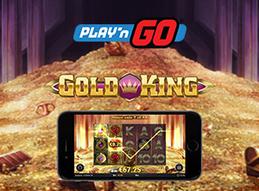 The motif of King Midas has been popular among online slot developers in the past couple of months, and Play'n Gois the latest company to jump on the bandwagon with their Gold King video slot. We have to say that it's looking like one of the better releases in the sub-genre overall because it's completely packed full of features with a strong visual appeal as well.

On the most basic level, this is a 20-payline video slot. It's giving players a great layout because the reels take up a significant portion of the viewing area without extra space along the sides, and all of the controls at the bottom of the screen are compact but easy to use. You'll have tons of bet sizes to pick from that range from penny stakes up to the high roller levels, and this means you can cash in on the gold craze no matter how much you're playing for.

This new slot is totally full of features, and it starts with the super stacks. One symbol is chosen to be stacked 12 spaces at random on each spin in the normal game. You can also trigger a set of 10 free spins called super spins, and you can re-trigger this feature as well. The top symbols expand during these spins to make it much easier to get wins, and the wild symbol is stacked to make it even easier to win big. There are lots of gold-themed symbols in this game as well, and that makes it fit the motif perfectly.

Trying Out This New Title

Play'n Go's new Gold King video slot is a good example of them putting together a title based on a somewhat plain theme that they have been able to make really come to life. They have focused on the gameplay for this slot, but the graphics are still solid, and it's the type of game that a lot of different types of players can enjoy. The volatility is pretty moderate as well despite the fact that there are some strong top payouts, so you don't have to worry about big swings either.