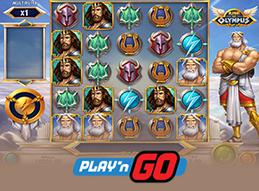 The latest title to be released by Play'n Go is Rise of Olympus, a title that takes on the Greek mythology sub-genre from a different angle. Players get to experience the three main gods in Hades, Poseidon and Zeus, who are all brothers, and see them come together to give you lots of value on the reels.

The layout does not use traditional paylines. Instead, players have a five-by-five grid of symbols that fill up, and any combinations of three or more in a straight line will pay out a prize. It doesn't matter where on the entire grid these symbols fall as long as they're in a consecutive line, and symbols can be a part of multiple winning combinations.

When you add wild symbols to the mix, you get even more opportunities to win, and that's before you even get to the feature set.

Players can get three randomized features based on these three key gods. Zeus will break down symbols to allow new ones to fall in place. Hades transforms symbols into new symbols for winning combinations. Poseidon adds extra wilds to the reels.

There are two major bonus rounds. The first happens when you fill up the golden meter, and it will trigger all three of these godly features at the same time. On top of that, you can clear the entire grid of symbols on the same spin to activate a set of free spins where one of the godly features are triggered on every single turn. What's more is that you get to decide which one is activated!

Rise to the Occasion

A whole lot of Greek mythology centers around these three brothers fighting in various ways, but they come together to help you out in Rise of Olympus. Play'n Go has put themselves in a strong position with this title because they broke away from most of the tropes that you see in the sub-genre. That can be difficult to do, and they deserve a ton of credit for it. That's the type of thing we like to see when these common themes are revisited over and over again.