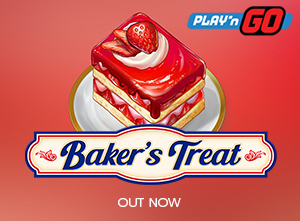 There's nothing quite like sweet treats that are visually appealing, and the Baker's Treat slot by Play'n Go is their newest release that gives you just that. There are beautiful cakes and other goodies in this game that help you to collect symbols to trigger features along with other types of ways to win. You wouldn't think that a game based on baked goods could be that exciting, but you'd be mistaken with this title available now.

A Tasty Way to Win

In the Baker's Treat slot, you'll have wins that pay in both directions with five reels and three rows. Whenever you get certain symbols on each reel, they will be counted with a meter up above the reel itself. Get three on that meter, and you'll trigger a feature that immediately gives you more opportunities to get paid. These are called the Flour Power features, and they promote longer sessions, so you may want to lower your bet size to facilitate that if you're interested in taking the game seriously.

Something that this software developer does better than a lot of the competition has to do with how they structure their graphical presentation. They don't use the same style of graphics in all of their games, and that's one area where they get an advantage. However, it's not their only edge in this department. They've also made this game look great with the food involved to the point that you might feel like reaching over and licking your screen. This isn't necessarily a game that you'll want to play while you're hungry either because the various treats available on the reels look incredible.

Play'n Go has been having a pretty good 2018 so far. They've had some strong releases that have gotten great receptions from players, and Baker's Treat is the latest of those. They seem to be getting better and better over time, which is almost scary considering how great they are anyway. Overall, we're looking forward to seeing what else they come up with in the next three quarters of the year because everything they've done so far has been tremendous.