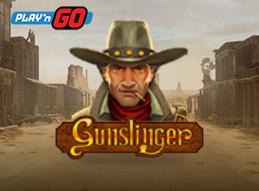 Play'n Go has announced the release of their latest online slot, and it's called Gunslinger: Reloaded. If you're a fan of Wild West themes or of action-packed slots in general, then this is definitely a title that you'll want to check out because it's bringing a fun theme, great graphics and a ton of action to the reels.

One feature in this game that drives a lot of the action centers around bounty hunting. Three of the wanted posters on the reels activates the bounty hunt feature, and you'll have a chance to chase him through the city to try to catch him. If you do, then you get a reward based on the amount listed at the bottom of the respective poster.

You can also activate a free spins mode for three of the bottle symbols. You'll get a 2x multiplier on all of your non-bonus game wins during these free spins, and that's something to get excited about since a quick winning streak will become worth so much more as a result.

To qualify for the jackpot, you have to get a winning combination for each of the five poker card symbols. From there, you'll have a chance to take down the jackpot in a bonus feature. It really just comes down to getting lucky since there's no skill element or really any choices to make about it, but we think it's interesting how it's decided since that's not something like anything we've seen for picking up a progressive jackpot in any slot ever before.

Play'n Go had a real hit with their most recent release before Gunslinger: Reloaded as well with Iron Girl, and it's looking like this game has everything it needs to be popular as well. The gameplay is very solid with lots of balance and ways to get paid in spite of the progressive jackpot, which is usually something that throws the balance of a pay table out of whack.

Players who will enjoy this game the most are those who enjoy Wild West themes and those who like having a lot of features with different ways to win.