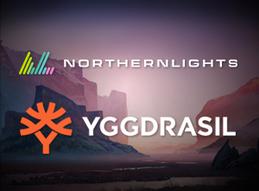 Yggdrasil Gaming has been developing something they're calling the Yggdrasil Game Server Masters Program, and it's taking on a number of third-party software developers that want to produce games for their YGS product. Northern Lights Gaming has been the first name announced that's been added to this program, and that's an exciting piece of news considering how promising both the program and this company happen to be.

What Northern Lights Gaming Has to Offer

The deal with Northern Lights is that they have a focus on quality. They haven't been around very long and were only launched last year in 2017, but they are full of industry veterans who have a very specific vision about what it is they want to put out there in the industry. This includes a focus on UK content, and since they get access to tools like Yggdrasil's BOOST product for in-game promotions, they'll have an edge against the competition along these lines. It's a very exciting time for both players and people at both companies as a result.

What to Expect From the YGS Masters Program

The idea behind this program is to bring on other software developers with the same passion and similar type of vision to provide content for the Yggdrasil Gaming Server product that they're putting together. This will put players in a position to get games from multiple developers on top of the already great content that Yggdrasil puts out. They're looking to be competitive with other platform options out there, and it's the natural extension of what they've already been doing for a while in terms of putting out great titles.

This year, Yggdrasil Gaming has been pretty great with their new releases and their push towards getting the YGS product going. The latter is something that will take some time to really build some momentum, so we can expect more deals with software companies this year to bolster that portfolio. Alongside that, we may see new games come out that focus on the platform in some way with their promotional tools and social media sharing tools that have already made them popular with developers and players alike. Overall, there are many exciting things happening with this company, and 2018 is looking like a pivotal year in their overall development.