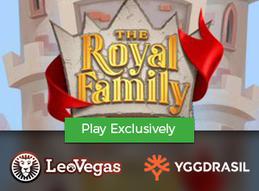 A very exciting development has happened with Yggdrasil White Label Studios since they have released their first title. It goes by the name of Royal Family, and it's being released at LeoVegas Casino as a part of their LeoVegas Originals series as the first time a game has been released as a part of the partnership between this operator and developer.

Details on This Release

This new game is a 25-payline video slot that is really feature-focused. There are free spins with sticky wilds, royal chests and feature prizes. A total of 12 different bonus features shows that there will be plenty of content to explore in this game, and it goes to show that there's still plenty of territory left to look at when it comes to innovation in the video slot genre. This title uses a fun style of animation for the royalty-themed game, and it has something that will appeal to the vast majority of players.

Since 2016, this program has been put into place to allow third-party developers a chance to produce games that will be offered through Yggdrasil's online casino platform. This is the first release through that platform, which we believe is the natural consequence of all of the work that they have done with their own games and software features. This will allow them to grow even more to give players an even wider range of titles to try, and that's the kind of thing that helps the industry as a whole.

LeoVegas Casino has an excellent reputation and has been in the industry for quite a while. They have a history of taking care of the people who play there in terms of strong customer service and quick and reliable withdrawals. These things go a long way in an industry where so much money is involved and financial transaction speed can make or break you. They also have a tremendous selection of games, and their inclusion as a part of their Yggdrasil White Label Studios partnership will have them getting even more to add to that portfolio.