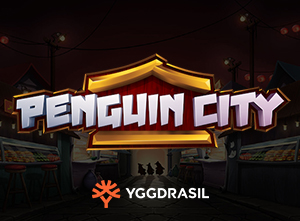 One of the cool things about the online slots world is that you can include lots of different themes and concepts. As a result, you can run through a whole range of games that can be everything from super serious to fairly silly and everything in between. The new Penguin City slot by Yggdrasil Gaming does just that by offering up players a funny theme with a bit of absurdity mixed in.

The Story of the Penguins

Here's the basic premise of the slot: The evil emperor penguin has enslaved all of the other penguins and makes them put together his food all the time. This leads to a hilarious theme based on penguins cooking and preparing food while planning their escape. While the theme is intentionally ridiculous, the graphics are outstanding, as you would expect from a game produced by Yggdrasil. On top of that, the gameplay is a lot of fun as well, and it includes a balanced pay table with some good features.

The gameplay for the Penguin City slot centers around the Penguin Escape Mode, which happens when you get a wild symbol on the second or fourth reel as a part of a winning spin (even if it's not a part of the winning combination itself). From there, you'll get re-spins over and over as long as you keep getting at least one winning combination, and the wild symbol that helped to trigger the feature (along with any other wilds) will remain sticky on the reels while this happens. To give players even more value, any new wilds that appear during the re-spins will be sticky as well for the remainder of the feature.

Closing Out 2018 for Yggdrasil

A lot of people weren't sure what to expect from Yggdrasil in 2018 because what they have to offer has been so good for such a consistent period of time leading up to the beginning of this year. However, they have shown innovation in a number of areas while simultaneously coming out with new releases like the Penguin City slot, and that has helped to keep them on top in a major way.