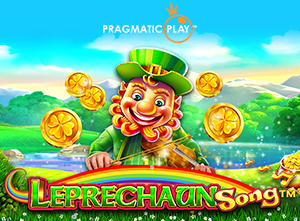 After players have been waiting for quite a while in anticipation, Pragmatic Play has finally released their latest online slot. This game is Leprechaun Song, and it's a title produced with winning some serious cash in mind without letting the volatility get too far out of hand. This helps to make it a good balance between the two major play styles that people tend to prefer.

What the Leprechaun Song Slot Offers

A ton of color helps to really make the visual side of things stand out and pop, and this is paired with a Celtic soundtrack that comes together really well with the overall aesthetic. In terms of gameplay, however, this game has a medium level of volatility, and most of that comes from the features and a pay table that has some pretty good wins at the upper end. While you won't have to worry about the swings getting excessive, you will have opportunities to score some reasonably high prizes.

For example, you can get extra wilds added to the reels or giant-sized symbols whenever the leprechaun sings his song. These are made even more serious during the free spins bonus round because you'll get these features on every single turn with the ability to re-trigger for an even longer bonus mode. It goes without saying that this can mean that you rack up lots of payouts in a short period of time.

Making the Most of a Common Theme

Because Pragmatic Play mostly doesn't work with licensing deals for existing brands in various media, they're often using themes for their slots that have been done several times before. As a result, they have to make those games stand out as much as they can to avoid falling into the crowd.

The Leprechaun Song game is a good example of them doing this effectively. The slot stands out visually, and the gameplay has a fun combination of features with a top heavy-enough pay table to keep things interesting. We have nothing against low-volatility games with high hit-rates, but sometimes players want a bit more excitement, and this is a game that can definitely give it to them.