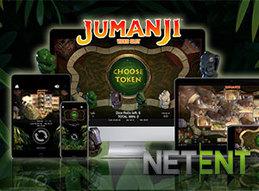 The latest Net Entertainment slot has been announced, and it's their Jumanji game that was previewed earlier this year in January. They've finally released it, and it's seen a ton of anticipation. This is the kind of game that has a tremendous history behind it, and you'll find all of the action and excitement on the reels as you might expect.

This title has an atypical reel structure with three symbols on the first and last reels, four on the second and fourth reels and five on the center reel. This lends itself to a ton of ways to win, and there are a number of feature that can happen at random as well.

With the wild stampede feature, rhinos will run across the reels adding up to nine wilds to the game board. You can also trigger the monkey mayhem feature where symbols will get shuffled around to guarantee you at least some kind of win. When the monsoon wilds symbol triggers, players will have one or two reels turned completely wild. Finally, there's the sticky vines feature, and it offers a situation where you get a free re-spin with all wilds and all other symbols that were a part of a win held sticky.

History Leading to This Game

The original Jumanji was a children's book about going through a jungle scenario. Sony later released a movie about it that took some serious creative liberties, but it became a tremendous hit. This game is based more on the movie than the original story, and it does have some degree of the darker elements of it without getting too far down the metaphorical rabbit hole.

Net Entertainment is always pushing out tons of hot releases all the time, and we see it again here with this title. We're sure that players are excited that this game has finally seen its release after having been built for several months. With that having been said, we're interested to see what they do over the next several months as 2018 starts winding down to a close.