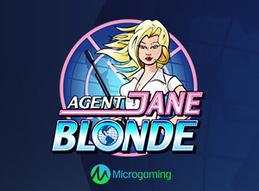 The newest game announced by Microgaming is Agent Jane Blonde Returns, a title that's known for being a sequel to the original Jane Blonde from way back in 2005. This woman is known for being Microgaming's first major heroine, and her return to the reels is timely with lots of new action movies having come out over the past few years with strong female leads.

Here's what you can expect from this new title. There are 15 paylines that will be spread across five reels and three rows, and it has a neon style of throwback graphics that look great. There are stacked wilds on the reels as well, and the re-spin bonus feature gives you plenty of opportunities to run up some pretty significant wins. Between the artwork and the feature-based gameplay, this is definitely a title that a lot of players will be looking forward to and for good reason, especially since the original was such a big hit.

This is one of the first titles produced for Microgaming by Stormcraft Studios, an independent game studio that makes games just for operators for this platform with an exclusive deal. It's a pretty interesting deal because it shows just how much is being invested in developers for the Quickfire platform, and with games like this being the result, it's definitely something that players are going to want more of in the future. While it doesn't have quite as many paylines as many recent releases on this platform, the feature set is very appropriate for the format as it is.

Microgaming developed software for the very first online casino back in the mid-1990s, and they've been widely considered the number one provider of online casino software ever since. With more than two decades in the game, they have kept up with all of the trends and stayed on top of everything they've needed to to keep their position. Now we see games with a legacy stretching back to 2005 getting sequels in 2018, and that shows just how much of a long-lasting impact they have had on the industry as a whole.