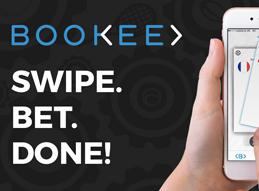 If you're a fan of sports betting, then chances are that you have at least looked into placing your bets through a mobile device. One of the problems you have probably ran into along those lines is that the user interfaces for mobile sports betting apps tend to be less than optimal. There's a new app that's looking to change that by putting the user interface first, which is something the mobile side of this particular sector of the gambling industry is sorely lacking.

The name of this app is Bookee, and it's described as looking to make placing bets a lot easier. The user interface for a mobile sports betting site often resembles a scaled-down version of a spreadsheet. This is fine on a computer screen, but because players have so much less visual real estate to deal with on a mobile device, this creates some serious usability problems.

Bookee works by focusing primariliy on the front-end. Of the many things that fantasy sports has gotten wrong, one of the things it's gotten right is the user interface on mobile. If things go well, then this app could bridge the gap between the depth of the sports betting world and the usability of more modern apps like Uber, Tinder, etc.

Direction of the Industry With This App

The idea here is pretty simple. The punters are given available bets on a screen that they can swipe left or right on to accept or decline. On this screen, they also have a simple slider that allows them to manipulate their bet size before accepting the wager. It's a very streamlined operation that is obviously inspired by modern dating apps, but the idea is to make things go as smoothly as possible while still maintaining a robust experience for players.

Overall, we're sure that a ton of tweaks and changes will come to this app, but we do believe it's time for things to see a facelift with mobile sports betting. They've done it with mobile slots and every other sector of the mobile side, and now it's time to do it with sports as well.

Billy Wood, This Gambling Startup is Looking to Tinder and Uber to Bring Bookies Into the 21st Century bdaily.co.uk, January 23, 2017