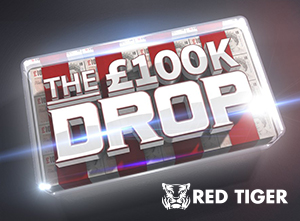 Red Tiger Gaming has developed something really incredible for launch with their £100k Drop online slot. This title has been developed alongside a television show that uses the same name that launched on May 7, 2018, on Channel 4 in the United Kingdom. This is the daytime version of The Million Pound Drop, another television show hosted by the same Davina McCall who hosts the one set up with the slot.

A Partnership and Future Games

This development came after a deal with Endemol Shine Gaming, and it will include future games as well. This includes a Deal or No Deal game based on blackjack that will allow players to give up their hand in exchange for a payment from the Banker, playing along the same themes and motifs as that particular game show. This is a very interesting development for a lot of reasons, and one of those is that it offers an approach to a classic casino card game that, to our knowledge, has never been tried.

Importance of This Game Release

The first thing that's important about this game release is the cool factor regarding it being made alongside a popular television program on one of the most popular channels in the world. That's something that the competition can't really claim at this point in the industry, and that gives them a leg-up against other software developers. Another thing that's important is that it's a part of an ongoing agreement that will have more titles released, which means they'll be extending the progress they've already made with this title.

Red Tiger Gaming has been running since 2014, and they're a company that has a ton of industry veterans in spite of not having been around all that long as an entity themselves. They do all of their audio and video work in-house, which means they're able to create some pretty amazing experiences for players. On top of that, all of their games look excellent, play really well and include lots of different types of features than you might be familiar with in other games.